This week I’ve arranged two songs for other people in the same project as me with the music producer. This time he’d given me great songs that I’d listen to anytime. So it was pretty easy to come up with something. As long as I can be passionate about something I can do it. Today I met up with him and he really loved my arrangements. If the girls who wrote the songs like them as well, they’re gonna be on the compilation like that. What a thought! I’d mentioned in an earlier blog that he’d done a radio edit of ‘Chaos & Order’ that I wasn’t too fond of. On Monday I’d finally gotten around to it and done it myself. The song is originally 5 minutes 30 long, but needed to be 4 minutes tops. I managed to get it down to 3’58” without feeling as if I’d cut out something important. All the parts are still present, some just shortened so people with a short attention span won’t lose interest. He loved it. There’s still a few little details to adjust and he wants to get me a trumpet player to add some nice bits here and there in a professional studio. He might use the song to get sponsors for the compilation, which boiled down to the essential means he thinks it’s one of the most promising songs so far. I also played him ‘The Tide’ and ‘Zero Tolerance’ as possibilities for the second song to go on the compilation. Initially I wanted to write a new song especially for it, but time’s running out. When he heard ‘The Tide’ he said he had whole movies running through his head which is such a huge compliment. I always try to tell stories with the music so that people understand the emotion even if they don’t get the words. I guess my songs are like short films without the pictures, where the score already tells the story and the pictures appear in your mind, everyone having their own personal movies.

When he heard ‘Zero Tolerance’ he instantly went for it. Not too surprising because even my parents favour it. So it’s gonna be song number two on the compilation. Kinda funny since it’s my reckoning with some people who’ve been treating me like shit (pardon my french) to let it all go and move on. A good way of self-therapy, I guess. In the beginning the music producer was like: ‘Yeah, that’s good.’ and after a couple more bars: ‘Really good.’ So that’s settled. I wasn’t too worried about the second song anyway. I already had the feeling it’d work itself out.

I must say I’ve been showered with compliments about my music lately. I’m not gonna let it go to my head, but I have to say it’s great to get some reassurance to go on on my path and after toiling in the studio for half a year. It might be a long way still till I can fund myself with music only and such nice words keep me right on track and working hard for my dream. The music producer said today that he believes I’m gonna be successful and find my niche. Also it looks like I’m gonna be one of a few chosen ones to play at a festival in late September with some big acts he organises. Furthermore he encouraged me to try and get work as a film score composer. Apparently a friend of his who had a new book published this spring is negotiating with some big film company and the music producer will then get the job to compose the score and wants me to collaborate with him on it. Sounds pretty exciting to me. It’s all a bit hush hush at the moment so I have to be so vague. Sorry about that, but I don’t want to trip myself up. More news once it’s official.

If you’re still reading on… either you’re really interested in what I have to say or really bored. Either way, thanks for being so patient. I’m sitting here typing for way more than two hours now.

Last, but not least, on June 28 I happened to come across the live webcast of the concerts of Sigur Rós and Björk that tried to achieve an awareness of environmental issues in Iceland. A good cause and great concerts. Absolutely amazing even through a screen. At the same time I was chatting to an Icelandic girl on the web who apparently is the youngest array mbira player in the world. I got to know her when I was asking around for advice on the purchase of an mbira. She’s been very helpful and since we’ve learned a bit more about each other. She even listened to my music on myspace and thought it was great and would do well in Iceland. So I got my first Icelandic fan while watching the concerts. Funny coincidence! Tomorrow I’m gonna meet up with a friend and we’re gonna plot how to get to the Melt! Festival on Sunday and back the same night. Björk’s playing the only gig in Germany there. After the webcast I really can’t miss that. 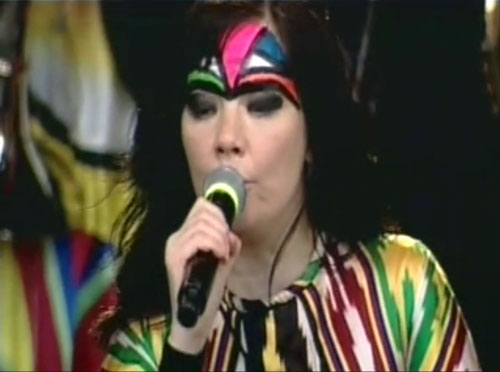 This Tuesday I got an email from a friend in London who still owes me saying I should try and get hold of a ticket to the Radiohead concert even though it was already sold out and he’d cover whatever the cost. I snatched the last one on Ebay and went. It was absolutely brilliant. Fantastic lightshow, great performance, the whole package. In fact, it was so good I didn’t mind the rain one bit. Thom Yorke apologised about it and said it was ‘a Radiohead thing’ and thanked all the musicians in Berlin for making ‘such great shit, especially Modeselektor’ who were opening for Radiohead. Thanks, Thom! And also thanks, Jon for giving me one of the best presents ever. Life’s sooo good! 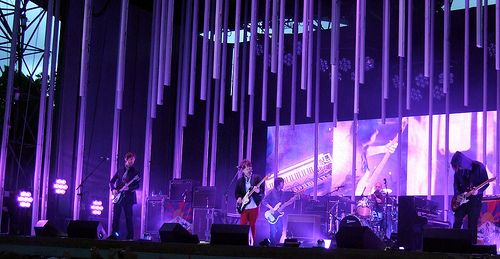 Phew, this is me breaking a record. My longest blog so far. That might teach me to write more often. Four hours straight. Quite tipsy by now. Gonna cook a tasty dinner now and then a bit more of making music.

Hermit in a Cave

In the Studio News