My name is Stu, I’m a 19 year old composery musiciany producery person from the UK. I like messing about with sound and writing instrumental music, songs, scores for short films and working on various other projects with a number of very talented (far more so than I), friends and collaborators. I also really like ice cream, seeing my friends, and going for walks around the countryside. 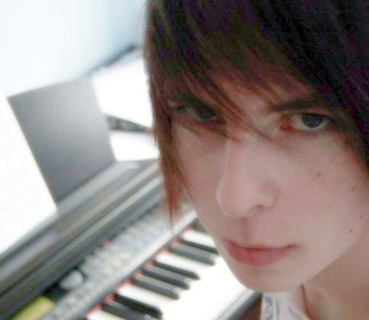 I originally got into music when I was about 4 or 5 and one of my teachers used to play the piano for us. I’d never heard a piano before and I just remember being completely fascinated by that noise, and really wanted to learn to make it myself. I started piano lessons (and did continue them till last year when I finally got my Grade 8) but I always found myself more interested in improvising and making my own music.

When I was a bit older I started recording some of my compositions with a really old microphone into the computer, then I read about MIDI and how that could be used to compose things on a computer using instruments that were not available to me, and that I couldn’t play. I originally used MIDI and technology purely for practical composition reasons, because I didn’t have an orchestra, or even a band to play my work. However after using the computer I found out I actually really loved using technology in music. I gradually taught myself more and more, getting better equipment over the years, experimenting with different software, discovering interesting new music through use of the internet and teaching myself to play various instruments through a mix of online tutorials and good old fashioned trial and error.

I released my first EP of instrumental music around 2008, and since then have steadily worked on my production skills and composition technique, putting out a couple of tracks every so often, remixing, songwriting, composing music for video projects and trying to improve as a musician as much as possible. I realized that while I love MIDI, I prefer having real audio and waveforms to stretch and chop up, as if I’m carving the sound out to be exactly the way I want it. At the beginning of 2012 I figured I was maybe at a stage where I could confidently record my first full length album and so for most of this year I have been working solidly on that. It still has quite a way to go before it will be finished but I’m enjoying it very much. (Sorry, long answer!)

First of all I’d just like to say, it’s really strange looking back on my remix of “The Tide” because it was the first remix I ever did, and one of the first tracks I finished that wasn’t just meant to be an experiment. I was still very very new to the world of production and remixing. I had absolutely no idea what I was doing and if I did it again, I would do it totally different, mix it better, compress certain things more, EQ everything more accurately, but I get a real sense of nostalgia when I listen to it, and remember how proud I felt when it was finished. I picked the song because it was my favourite, the original version really stood out to me, as it had an almost aggressive sound to it, and I wanted to take the lyrics and vocals away on their own and interpret them in my own style. I didn’t want to do a remix in the traditional sense of making it more electronic, or chopping up the beats (even though I LOVE doing that). I probably couldn’t have done a remix like that back then because I didn’t know enough about the techy side of things. Because of that, I picked mostly acoustic sounding instruments, and any synths I used were pretty organic, nothing too harsh. It was a very exciting thing for me to do, especially when it was played on a German internet radio station. It was the first thing I did that was heard by more than just a couple of my friends, and really pushed me to want to get better and feel that rush again.

Everything and anything, musical or otherwise. I can get inspiration from visual stuff, such as a picture or a place, or it can be a piece of music which I really like that triggers off an idea. Even something as simple as an interesting sound I hear when out walking. I love collecting samples and then creating a completely new sound out of them, and in the process I’ll usually get an idea for a melody or a rhythm and manipulate it into that. I love throwing interesting chord changes and time signatures into the mix, finding a new bit of technology to play with, or even just buying an old instrument on eBay. If all else fails I just sing in the shower and see what I come up with. Usually works quite well.