As promised, here comes the sequel… So what else have I been up to lately…

Last Tuesday was the last hot day for a while and since I hadn’t had much time to enjoy the sun I’d decided to go to a lake to finish the lyrics for ‘The Tide’ there. Found a nice, secluded spot, went swimming – the water was still pretty cold, but lovely and refreshing – and then took out my notebook and pen. I got everything but the last verse. Not sure how to conclude the song, yet. I’ve got a couple of different scenarios and I guess I’m gonna leave that open until I’ve arranged the music. Very happy with what I’ve got so far. 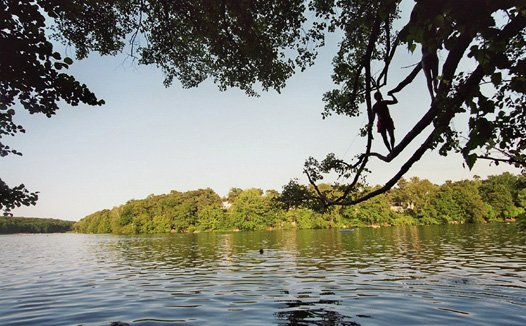 After that I had another appointment with the music producer. I gave him the soul song I wrote for someone else in a rough outlined version so she can sing on top of it. He really liked it. Last time I’d been there he’d given me two songs that needed beats, but I disliked the songs so much that with each listening I felt more like getting sick. Sooo not my cup of tea. This time he’d considered my taste and given me a couple of songs that I really like and that inspired some ideas already during listening for the first time. Also I can try whatever I like. It seems to let me work to my strength means not to put me on a short leash. The music producer agreed that I do the radio edit for ‘Chaos & Order’. I understand that he wants to make the song interesting even to people who have the attention span of a mayfly. That’s fine, but I’d rather do it my way. There are supposed to be two songs on the compilation and I’m gonna write a new song specifically for it.

It’s funny how the music producer treats me now. In the beginning he found my music interesting, but he was slightly reserved. I reckon because he thought it too weird. He seems to play everyone’s music to all kinds of people to see how they react. Well, each time I go there I meet someone new. And the introduction goes like that most of the time: ‘Hi, I’m Madeleine.’ ‘Oh, hi. Love your music!’ This resulted in the music producer calling me his shooting star now, which seems a bit like piling it on too much. But it’s nice realising that you can do your own thing and people aren’t only interested in the same old, same old.

A couple of days ago I sat down and made a plan what’s left to do to finish the album. Time’s running out, it’s coming to a close that I can blissfully make music and nothing else. By the end of July I probably have to seriously start looking for a part time job. The good thing is it appears feasible that I’ll be finished with my 12 songs, preparing all songs for the stage and writing another one for the compilation till then. So the timing is right, but I’ll have to work quite a bit in these weeks. I tried to apply proper time management methods where you calculate how long you think things will take and then multiply that by two for unexpected and unknowable delays. Still I’d love to continue just making music, because the learning curve in the last couple of months has been so steep for me and there are so many more songs left in me. That’s why I only want a part time job. At least then I’ll have quite some time left each week for music. I might even have something already. The music producer asked me if I was interested in doing the event management for the huge gig at the end of the year. If the hourly rate is right, gladly. Well, we’ll see.

Thursday night I took my MD recorder and my new Sony stereo mic and went around Berlin recording all kinds of sounds for my song ‘Euphoria’. I’m really happy with the quality of the recordings I got. The next day I edited all of it and replaced the old sounds with the new ones. The basic rhythm is made of a woman walking in high heels and the clicking noise of a traffic light near where I live. The song starts with an S-Bahn arriving and the amazing thing is when I put the sound in I discovered that the rumbling on the tracks is completely in sync with the tempo of the song. In the refrain there’s gonna be more sounds of the S- and U-Bahn. I still have to refine the sound of the beats and put little details in.

On Saturday I packed up my Mac, my little keyboard and some clothes and went to visit family and friends in my hometown. The first few days I was busy catching up with all of them. I hadn’t seen most of them for months. Especially my brother including his little family. My nephew is very musical and we already played a bit together and we’ll continue this afternoon when he’s coming from kindergarten. It’s a lot of fun seeing him eyes aglow when he tried out playing a keyboard for the first time. And it’s great to get a change of scenery from time to time. I felt like a holiday, but I’ve got no time for it and neither the money – I’m buying the array mbira instead. I feel much more relaxed and ready to keep working and pulling all bits together to get the album finished.

One more thing… lately I’ve worked till early in the morning quite often and ended up being too tired to write the blog. So I thought I’d join twitter, because that way I can keep you posted about what I’m up to in no time. So if you want to know what I’m working on and there’s no update in this blog, you can check here.

Phew, what a writing marathon. Guess I’ve mentioned everything. And now back to rehearsing.

Collabs, In the Studio, Ramblings

Tidying and ‘The Tide’