I’m a 27 year old guy from Paris, I’m a kind of musical geek fascinated by clouds and animals. I live with a dog and cat and my dream is to bring us all to the country in a little house made of stones and we would run in the fields and stare at the sky all together for hours. 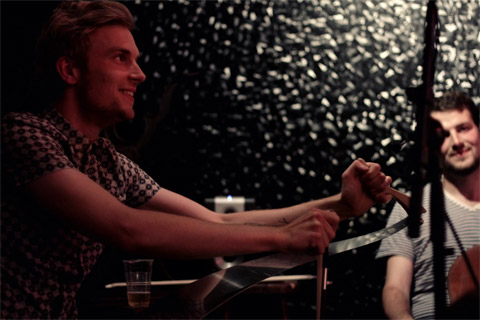 As soon as I understood how much music was important to me, I started to make music. I’m basically classically trained, I used to play the flute but I hate it. My favorite bands are more or less mixed between classical influences and computer assisted music (people like bjork, lamb, imogen heap, kate bush, bat for lashes …). Now I play the musical saw on stage with a french singer called Mathilde Forget and I also deal with all the geeky electronic stuff. The saw is my favorite instrument ever, it’s totally spooky, comic and dramatic at the same time. I also make my own songs but I guess I’m too shy to send them on their own to the world yet. but soon … it might finally happen.

I guess I chose this one cause all the other ones are so perfect that I couldn’t imagine tweaking them in any way. But for this one I could hear something different, that could kinda make it my own. This song sounded like a sinking to me. I instantly imagined the voices drowning into the ocean and a boat slowly sinking. So I chose to totally cut the voices into little pieces and make them say something else. I spent hours recording stuff in my apartment, beats on the water in my bathtub. There’s even a rythm made with my rice cooker switch. I’m really happy with it and I’m thankful that Madeleine put it online.

(Here you can ask the question you’ve always wanted to answer, but no one ever asked and well, answer it)

Nobody ever asked me why I’m so constantly melancholic.

I would answer that it’s simply because of the clouds and the songs they sing (when you’re able to hear them). Each one is played only once, you never get to hear them again and for people like me, once is not enough, and you miss hearing them all again, constantly.

Let’s mingle with: That Guy With The Headphones