Hello there, I’m Synoiz, I’m an electronic soundtrack artist from sunny England. Well… England. I’m mostly known for my album Ambients and for my sinister music videos and Twitter ramblings! 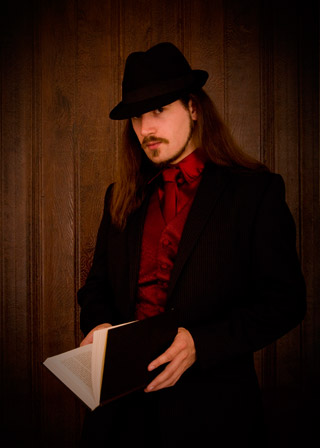 Looking back, bizarrely, I’ve always been around music production, my brother and various friends had always been in bands while I was growing up however the idea of me actually making my own music never occurred to me until later. I guess it was hearing the music of masters like Vince Clarke (Depeche Mode, Yazoo, Erasure) and Akira Yamaoka (composer for the Silent Hill video game series) that made me go “I want to do that, I want to try and affect people as much as their stuff affects me”. Since I started I’ve released an album, various singles, music videos and several soundtracks. I haven’t released much lately since I’m getting more into film and game soundtracks so my other stuff is mostly on the back burner!

I picked Zero Tolerance to remix mostly because it’s the black sheep of Minutia, it’s the one song that, to me, sounds nothing like the others and I can never make up my mind on if I love it or loathe it haha. It’s a great song lyrically as the idea of just saying “Right that’s it, I’m not putting up with any of this any more” is something we can all relate to, my spin on it was what if I cut the lyrics up and rearranged them to make Madeleine go a step further and become a serial killer that was bumping off everyone that wronged her? The date that took advantage, the thieving housemate… I think I put the track together by working out which bits of the original I wanted to keep, layering out the percussion and then rearranging the vocals. I then recorded some spoken “newscaster” parts myself to add an extra story side to it.

What would you most like to achieve from music?

I guess I’d just like to make an impression, for me I’d love knowing that my music affected someone or that a film or video game soundtrack I’ve done is listened to in its own right like I listen to the Silent Hill soundtracks. I’m terrified of the idea of too much success as being an unknown is wonderful when you want to do as much stuff as possible. Right now I feel like I can work on anything I want musically without too many “this isn’t as good as your other stuff” reactions.