All over the charts

After writing last time I gave myself a four day break from my music. Spent the days cleaning and tidying up my flat (couldn’t stand the mess anymore), clothes shopping (it’s sale after all) and visiting my grandparents for the first time in ages. Taking time off helped getting some distance to see more clearly what still needs more work. So I’m going to do the same thing for three days again starting tomorrow. I’ll have a nice little holiday at Usedom together with a friend. Getting away from the heat of the city seems a good idea already. Might be the only holiday this year for me.

I haven’t been only lazy though. On Monday I started recording the vocals for ‘Paperheart’, just to realise that the song needed to swing. Made the song so much better, especially when I speeded it up a tad. Of course, that meant that I could throw the vocals in the bin. I also had to readjust the beats, but I’m very happy with the way the song turned out. Here’s a little bit of it (by the way, all the beats are made of paper):

On Tuesday I’d planned to record the vocals again, but the guy from the hostel opposite got his power tools out and kept being a noisy bugger until today. So noisy in fact that the sawing and what not kept bleeding into the mic recordings. Gotta be flexible, I told myself and finally got around to recording all the piano parts for the songs. Namely ‘Paperheart’, ‘Breathing Underwater’, ‘Hearts First’, ‘Zero Tolerance’ and ‘Euphoria’. Makes such a big difference it’s incredible. It’s as if the songs have finally come alive. I think I know now what ‘Hearts First’ still needs and it is less then I thought.

I must admit I haven’t recorded any vocals this week in the end. The way ‘Paperheart’ seemingly worked itself out was just to tempting. Although I at least edited the vocals for ‘Scaredy Cat’s Lullaby’ today. I really love the choir created by layering my vocals on top of each other. I checked all the songs in detail. Muting and soloing tracks. After while I sorta lost track of what I’d already done and what not. Last night I started drawing up a big chart to have the progress of each song in black and white and did bits and pieces here and there – everything that didn’t take that long. Quite a few boxes already ticked off. Good feeling. I guess the chart is also gonna be a good motivation tool to make it through the finish line with the album. I can almost see it by now.

I have finally decided on an mbira which I will get in only three weeks. Very excited. Patrick, who’s doing the customer service, is such a nice guy, extremely helpful. He’s sent me a picture of the mbira I’m gonna get. Still a bit unfinished. Looking lovely though. It’s made from African Sapele. Here’s the pic: 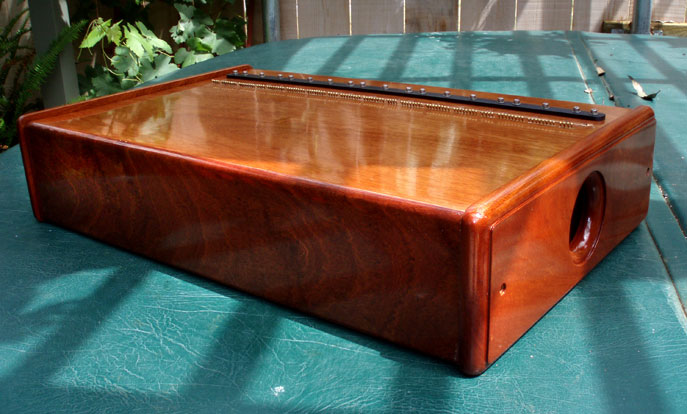 Gotta start packing for the trip and then bed.

Bread Crumbs, In the Studio, Ramblings

Hermit in a Cave