It’s already been a week again…

After I last wrote, Tuesday night, I couldn’t sleep. I was quite worried what the music producer had done to my song. So after a chat with my best friend that lasted till five in the morning I decided just to stay up. I played on my keyboard with headphones and had a lot of new ideas that I instantly recorded in Live. Around midday I had a little break and fell asleep on my armchair, went to bed and slept for four hours. When I woke up I got right back to playing and came up with an idea for a song. I don’t know if I’d mentioned that I was asked to write a soul song for someone else. I’d been listening to soul a lot to research chord structures etc. The following day I continued fleshing out the idea and it’s not bad at all. The music producer really liked it and will probably use it. He also played me what he’d done with ‘Chaos & Order’ which is basically just a radio edit. Not sure if I like it. It’s got a fad in. Yuck! I’m starting to think I’d rather write two new songs only for this compilation. That way I can see the whole thing as something like a collaboration. My friends to whom I talked to about it agree. They even said that no one would want their children messed up by someone else after bringing them up all on one’s own. Funny they used this allegory. Spot on, I guess!

On Thursday I also went for a long cycling trip through a nearby park and an adjoining forest, offroading and all. Very enjoyable! I’d completely forgotten how exhiliarating it can be. On the way back I paused by a lake and started assembling ideas for lyrics. Basically jutting down everything that came into my mind, without any particular order. That seems to work best for me these days. Make sense of them later after collecting thoughts.

While working on the soul song I already came up with a little bass line that I thought has loads of potential. I sorta forgot about it until I was about to turn off the computer and go to bed. So I opened up Ableton Live again an quickly recorded it and all of a sudden all the arrangement ideas came flooding out of me and I ended up staying up till five in the morning. It’s the song I’m working on at the moment. It’s called ‘The Tide’, at least for now and it’s pretty dramatic with pizzicato strings, harpsichord, big drum sounds and in waltz time. I only have the lyrics for the first verse and the refrain so far, but since the weather’s supposed to be very summerly in the next couple of days I’m gonna go to the park and finish them in the sun. Maybe even write some more. The metaphor for the chorus came to me in the shower. Being relaxed seems to be the way to go to get in the mode. The vocal lines are there. When I sent a rough sketch to my dad today via Skype he said it rocked. Ha!

I got my new phone yesterday. Installing the stuff onto the computer took a bit, it kept cutting out, but it works now so I can upload pictures from now on. One of the first ones I took (my orchid): 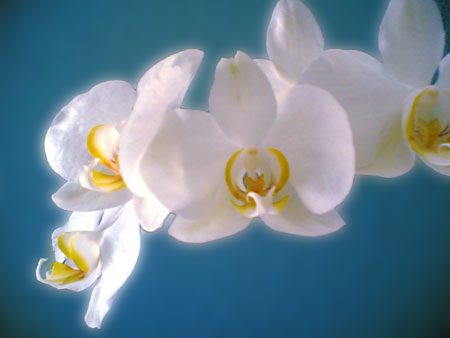 Collabs, In the Studio

Counting down to zero

In the Studio Ramblings