About two weeks ago I listened back to all the songs and song ideas I have. I thought I was pretty much right at the beginning of the next album. Turns out, there’s quite a bit done already. So far I have 6 songs that are either missing only a few elements or are at least mostly mapped out as arrangements. Listening back has really sparked things off. Before that, I felt kind of lost, didn’t know where to begin and where things might lead. In short, I found an in and now have a plan.

Live & Learn, Together and Reverie already made appearances in my vBlogs (from *cough* 2012). Epicycle, an instrumental, as a rough draft:

And then there are two new songs, Noise Machine and Tipping Point. They’re both pretty danceable with fat synth bass lines. I’ve used the Easter holidays to record bass lines for most of these songs. With a Micromoog and a Minitaur (yes, I <3 me some Moog). Next up is recording all the instruments, refining the beats and recording vocals. I’m hoping to have the first 6 songs within the next three weeks or so. 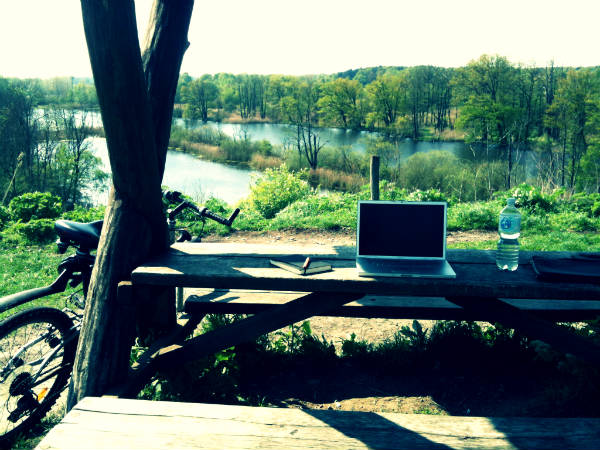 My workplace at the nature reserve. Beautiful, isn’t it?

Last Friday, I felt very antsy trying to work in my studio. It was warm and the sun was shining. Finally I gave up, grabbed my laptop, lyrics notebook and cycled to the nearby nature reserve. I went through all my lyrical ideas there, again surprised how many I already had. I put some finishing touches on some. So now I have 8 more finished lyrics and two more half done. I’m so happy and relieved about it. Quite frankly, lyrics are the toughest part in the process and they need to be done early on or else I end up getting stuck.

Also I no longer work so much, but I’m able to have at least two days per week to work on music. Right now I’m just working off a to do list so that next week it can be all about music.

I’m considering to start up the vBlogs again, but I’m not sure if it will not eat up too much time. Maybe keep them short, sweet and simple. Let me mull this over… What do you think?

More soon one way or another.